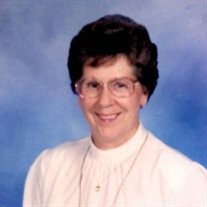 Ruthie was born April 21, 1934, in Pennsylvania and passed into the presence of her Savior on the afternoon of March 27, 2021. She was 86 years old. Her daughters were at her bedside. She was preceded in death by her parents Harry Morrow and Bessie Fisher Morrow, her brothers Ronnie Morrow, John Morrow, Carl Morrow and Ed Morrow, her adopted sons Gilberto Fernandez and Simon Suarez, and her husbands George Stanley Burt and Robert Cornwell. She is survived by her brother Percy Morrow and sister Martha Morrow Johnston Sherman. She is also survived by her children Louise Burt Hewlett (Donald), Rebecca Burt (Jennifer) and Robert Burt, five grandchildren and four great grandchildren. Ruthie knew at an early age that she was called to be a missionary and became the first missionary to go out from the Federated Church in East Springfield. While in missionary training she met and married George Stanley Burt, an Englishman. Together they served 30 years in South America in the countries of Bolivia and Peru. Ruthie did a lot of medical work in very primitive conditions and delivered well over 1,000 babies, vaccinated untold numbers of children and adults, and took care of many medical conditions, all while teaching and church planting. She was supported in everything she did by her husband, George, and loved by the people of the villages she ministered in. Many of them called her Mami Ruth and have told us she was “un gran mujer” (a great lady). After they retired from the foreign field, they worked at the mission headquarters in Mississippi where Ruthie ran the print shop. When her husband passed away, Ruthie moved to Georgia to work at Source of Light Ministries. She served as a translator and oversaw Spanish Bible correspondence courses for students around the world. It was there she met and married Robert Cornwell. Eventually they moved to Alabama to be near her daughter, Louise. Ruthie lived a full and busy life as wife, mother and missionary. She never stopped telling people about Jesus. Several of the aides and nurses at the nursing facility where she spent the last days told us she had talked to them about Jesus and their need for Him. We know she is rejoicing in Heaven as she was looking forward to meeting her Savior face to face. She served Him faithfully and well until the end. The family asks that in lieu of flowers, gifts may be made to Source of Light Ministries International, 1011 Mission Road, Madison, Georgia 30650