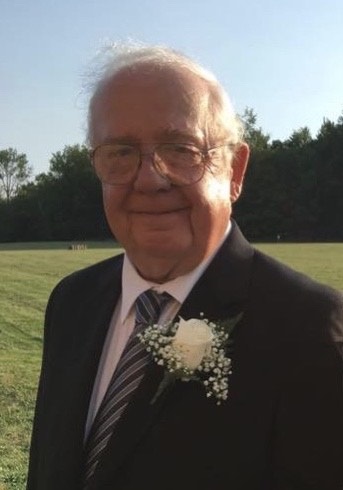 John R. Smith, 77, of Springboro, passed away at home, surrounded by his loving family, on Thursday, January 16, 2020 after a brave battle with pancreatic cancer.  John never gave up and fought his cancer until the very end.  He was born November 17, 1942 in Erie, a son of the late Roy and Aurelia (DeCourcy) Smith.  John proudly served his country with the U.S. Navy, stationed aboard the USS York County LST-1175 during the Cuban Missile Crisis.  He retired as a machinist for American Hollow Boring Co. in Erie, working there for over 30 years.  He and his wife enjoyed traveling and going to Florida for the winters.  He enjoyed camping, kayaking, bicycling, fishing and drawing.  He was very proud of the 1954 half ton Chevy pickup he restored, and he enjoyed driving his Ford Thunderbird, a car he wanted his entire life and just got last year.  John truly loved spending time with his family, especially his grandchildren and great-grandchildren.  In addition to his parents, he was preceded in death by a son, Michael J. Smith, a sister, Donna Smith, and a brother, Terry Smith.  He is survived by his wife, Joan (Oler) Smith, two daughters, Cindy Beil and her husband, Scott, of Conneautville, Julie Abrahamson and her husband, Brian, of Shrewsbury, VT, eight grandchildren, Doug Beil, Alaura DuBray, Aimee Pittrich and her husband, Luke, Dustin Beil, Alyssa DuBray, Kaitlyn Beil, Kelly Beil, Jonathan Beil, four great-grandchildren, Landon DuBray, Caden DuBray, Mallory Pittrich, Lucas Beil, a brother, Richard Smith of California, a nephew, Robert Mangold of California, and a special friend, Rick Forinash of Springboro.  Calling hours will be held at the Mattera Funeral Home, 188 East State Street, Albion, on Wednesday from 5pm-7pm.  A graveside service with full military honors will be held on Saturday, January 25, 2020 at 11am at Spring Cemetery, Springboro.  In lieu of flowers, memorials may be made to pancreatic cancer research by visiting www.lustgarten.org.  To light a memory candle or leave a condolence, please visit www.matterafuneralhome.com

So sorry for your loss! Just found out today from Michelle a few minutes ago. Our prayers are with you!

We will miss you John, and your hardy laugh! Love Mike and Judy

Forever in my heart.